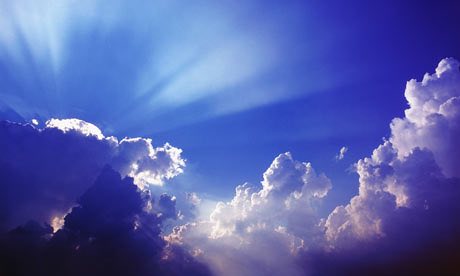 The scene:      Somewhere in the heaven lies directly over Jerusalem.

The actors:     Satan and several of his cohorts.   And Pride.

What an unholy crew, Satan the ruler of the underworld and three of his demon helpers, Complainer, Hater, and Death.

What they were watching from their vantage point of spirit infested air, was the sharing of assets among new believers in Jesus in the after-glow of first His resurrection and more recently the power promised to new believers through the indwelling of the Holy Spirit.

“I thought you said we won when you got the people to kill Him. I though you said we had Him forever in the bowels of Hell. I thought—“(Not one of the demons or Satan himself can ever bring themselves to speak His name for fear of the power in that name.)

Satan was distraught. He had thought he had his enemy in his power. Over and over in his mind the events of what had become known as “Day Four” ran like a motion picture

First the crucifixion, then leading the spirit of Jesus to Hell, locking Him up and watching Him suffer for three days and three nights. He and all Hell’s inhabitants taunted Him endlessly for what He had done to hurt their purposes while He lived on earth. But then on “Day Four;” Even Satan had to admit it was quite spectacular.

In the midst of all the weeping and gnashing of teeth, Jesus sat quietly waiting for dawn. Suddenly a great, powerful, mighty rushing wind swept into Hell causing the very foundation to shudder! It went directly to the cell holding Jesus and entered Him! He who a moment before had sat so still stood up in the  power of the Holy Spirit of God, having within Him all the power and authority in Heaven and earth and over all creation! He tore the hinges off the door and stood in front of His adversary, Satan and whipped him, exposing him to all the inhabitants for the toothless phony he was. Then Jesus took the keys to death, hell, and the grave away from Satan.

He lost his keys!

Now all that was left for him to use to defeat Man was deception. No more power, only lies.

Jesus preached the world’s shortest sermon to the captives in Abraham’s bosom, saying simply, “I AM!” Then He led them to heaven.

Yes, Satan thought it was impressive. But it only made him hate Him more.

Satan’s thoughts were interrupted again by Complainer. “What are we going to do now, oh great master.” Satan heard that remark and the sneer. He hated them all. But that was the question, wasn’t it? What was he going to do to destroy Man now that Jesus through the Spirit of God had returned their power to them? Oh how he hated them! Mankind, God’s great creation made to rule the earth and everything in it. His world! He Satan had the right to rule taken away because of his pride of his own beauty.

In the distance, but closing fast, came a black chariot pulled by black angry steeds causing great commotion and cloud dust flying in all directions. They stopped right in front of the assembly. Two footmen quickly jumped down and with great fanfare one blew a horn while the other opened the door to allow PRIDE to appear.

Pride, the only spirit having the ability to hide himself within himself, (have you ever noticed that prideful people never recognize themselves as proud?) looked at the group with distain.

“Now what’s the matter?” he asked. Satan tried to ignore him. Pride had always felt he deserve more honor than Satan, it was after all, he, Pride, who had caused the rebellion in heaven he had simply used Lucifer to accomplish his end, or so the hateful argument went.

Complainer, Hater and Death all wanted to tell Pride what they thought about the new believers. “We are never going to get them now. They all love each other.” Complainer said. Hater chimed in with “I hate them and their leader but I don’t know what to do!” Death asked, “How do we kill the God life?”

Pride sighed. “Has everyone forgotten what I have taught you over these long centuries? When you have no real power over Man you deceive them and cause them to destroy each other.”

“And how do you propose we do that?” asked complainer.

The group watch as Pride descended to the supper gathering of believers. They watched as he whispered in the ear of one of the women from Greece.

Acts 6:1 –“there arose a murmuring of the Grecians against the Hebrews because their widows were neglected in the daily ministration.”

As Pride rejoined the others, he said rather smugly, “See how simple that was? Just suggest they do the opposite of what He told them to do. He said they should be one. We say divide them and we win. If we keep them fighting among themselves they will be devoid of power and our influence will be greater than theirs.”

“So how do we control them in all the different places they live?” Death asked.

“OK, OK, OK this will work. I can see it working!” Death was speaking again excited about the death of the new movement based on Him.

Hater had an idea. “We need to name the new divisions.”

Satan warming now to the prospect of turning defeat into victory spoke. “Why not call them what we always have, Demon Nations?” Complainer argued, “Nobody will follow a movement call Demon anything.”

Pride sighed again and scolded; “Can’t anyone think? Deception! Change a couple of letters and they wouldn’t know the difference but we will know they are singing our song. In fact they will be calling for their own destruction and not even realize it.

Someone said, “Reverse the order of the N and M. They sort of look alike anyway. Call the divisions Denom nations.”

Someone else mused, “There is something not right about that word. What is it?”

Pride said smiling, “The problem is I am not in the middle of the solution. If you put Pride in the middle of the word, it flows off the tongue like honey and I, Pride can hide in all their affairs. Denomination is just another word for division and when we separate them with divisions Complainer, Hater and Death can all work undetected, protected by me, Pride.”

Fanciful story you say, but did it work?

The first denominations were called sects and yes it worked in the first century and it is working today.

“THE FIRST CHURCH OF THE CIRCUMCISION”

Vs: 1 And certain men which came down from Judea taught the brethren, and said, “Except ye be circumcised after the manner of Moses, ye cannot be saved.”

“THE FIRST CHURCH OF THE CIRCUMCISION & THE LAW OF MOSES”

Vs: 5 But there rose up certain of the sect of the Pharisees which believed, saying, “That it was needful to circumcise them, and to command them to keep the Law of Moses.”

Please notice the members of the sects were called believers. These were Christians who added their own rules or beliefs to the pure simple Gospel.

Acts 16:31 ---“Believe on the Lord Jesus Christ and thou shalt be saved and thy house.”

If you are caught in the rules and doctrines of men, come out from among them, be freed by the Son of God, worship and seek Him and you will be found.

Bible verse of the day

I appeal to you, brothers and sisters, in the name of our Lord Jesus Christ, that all of you agree with one another in what you say and that there be no divisions among you, but that you be perfectly united in mind and thought.
1 Corinthians 1:10
DailyVerses.net